Anthony Carano, President and COO of Caesars said that the company’s investment plans over the next three years will cement the brand’s reputation as the leading casino resort developer in the industry. Caesars Entertainment’s goal is to strengthen Harrah’s Tropicana, and Caesar’s Atlantic City’s position in the New Jersey market.

Carano added that Caesars will continue to invest in Atlantic City as they firmly believe that Atlantic City will bounce back after going through a tough time during COVID-19.

Caesars will begin its project mid-2021 and will start with redesigning the interior, the gaming floors and the rooms of its Centurion, Ocean Towers, and Harrah’s Atrium Tower properties, thus setting aside a budget of $170 million. This will be done with the assistance of Interior Image Group. All in all, around 600 hotel rooms will be renovated.

Caesars and Harrah’s will have different concepts, the former will focus on Roman aesthetics while the latter will be using features derived from the Marina District location.

Mayor Marty Small, Sr. said that Atlantic City is now ready for a new era this year, and they are looking forward to what Caesars can do to transform the market in Atlantic City.

Mayor Small announced that a proposed 2021 municipal budget of $199 million will decrease Caesars tax rate by 5 cents. However, the budget must first be approved by Atlantic City’s Department of Community Affairs as it falls under the state’s Municipal Recovery and Stabilization Act of 2016.

Gov. Phil Murphy of New Jersey weighed in on the investment plan announcement and said that his administration had reached out to third-party investors to assist Atlantic City in re-establishing itself as the main tourist attraction in New Jersey. As soon as that is done, there will be a push to create more jobs and boost the local economy.

Based on gross gaming revenues generated in Atlantic City during 2020, reports show that Tropicana ranked fourth at $231 million, Harrah’s came in sixth at $166 million, while Caesars was ranked seventh with $152 million. 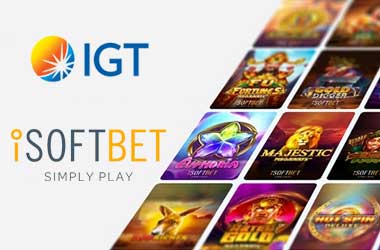 IGT Expected To Confirm €160m Acquisition Of iSoftBet In June