There have been rumors floating around of a possible sale of the Sands Bethlehem Casino in Pennsylvania for the last few years but very little official information has been circulated. Now, details of a $1.3 billion deal between Wind Creek Hospitality and the Las Vegas Sands Corp have emerged.

Las Vegas Sands Corp had confirmed it had decided to sell its Sands Bethlehem Casino in March 2018 but the public were not sure if the sale would include the casino and outlet mall, or whether the Steel General Office building and the satellite and annex parking lots as well.

Las Vegas Sands owns the majority of Sands BethWorks Gaming LLC which currently operates the casino, events center, as well as the surrounding 56-acre land. Real estate developers Michael Perrucci and Barry Gosin, along with other business partners have a 10 percent share in the company.

Perrucci and Partners To Retain Ownership of SGO

The deal is that Wind Creek will buy the casino, hotel, events center, some parking lots and outlet mall. Perrucci and his business partners will let go of their stake in these assets but they will retain ownership of the property and will enter into a ground lease with Wind Creek. Perucci refused to release further details of the ground lease, saying it is protected by a non-disclosure agreement.

Upon completion of the deal, Wind Creek is eyeing a 300-room hotel expansion, with the No.2 Machine Shop probably being transformed into an indoor water park. The company will pour in $190 million into the development.

The deal has been positively welcomed by officials from the city of Bethlehem who have high hopes for the redevelopment of the property. Arthur Mothershed, vice president of business and development for Wind Creek confirmed earlier this year that they will control the site.

Bethlehem’s director of community and economic development, Alicia Miller Karner said they are optimistic about Wind Creek’s reinvestment in a property which has sat vacant for decades. Perrucci and the rest of this investment partners retaining ownership of the SGO building and annex is also seen as a good sign, given the developer’s contribution to the ongoing revitalization of East Third Street. 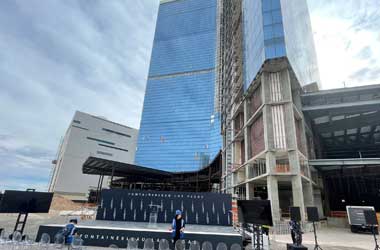