Mohegan Gaming & Entertainment has set its sights on the city of Tomakomai in Hokkaido to develop an integrated casino resort.

The Connecticut based Mohegan Tribe which runs Mohegan Gaming is willing to invest between $3.5 billion and $4.5 billion in Japan’s new casino market. There is a lot of competition from international casino operators who are keen to secure a gaming license in Japan and develop a new integrated resort (IR).

Japan is seeking bidders to establish up to three integrated resorts around the country. The Japanese government wants these operators to build more than just a casino. Casino operators will have to invest billions to develop an integrated resort that provides entertainment and adventure apart from the casino floor.

These integrated resorts are expected to significantly boost tourism numbers and grow regional economies outside of its business hubs.

Japan lifted its ban on casinos last July after its Parliament enacted the integrated resorts promotion law, which allows up to three casino resorts to open in key cities around the country.

While Japan has yet to formally open its selection process, several international gambling companies have floated their bids, with a handful of Japanese cities and provinces already conveying their interest to host integrated resorts on their territories. The Island of Hokkaido and the city of Osaka are among the regions seeking to lure gambling operators.

Mohegan Gaming is looking to strengthen its presence in the Asia gaming market. The tribal casino operator has already a deal to build an integrated entertainment resort in Incheon, South Korea. With construction underway, the property’s first phase is set to open in 2021.

Mohegan Gaming has focused on Tomakomai’s forested terrain to develop an integrated resort with a casino, 3 hotel towers, a conference hall and entertainment arena. Mohegan also wants to capitalize on the location’s rich natural setting by offering facilities that will cater to outdoor activities like skiing and horse riding. The property is seen to permanently employ between 5,000 and 7,000 people.

The tribal gaming operator would like to pay tribute to the culture of the indigenous Ainu people of Japan by inaugurating a museum dedicated to the customs of both the locals of the Island of Hokkaido and the Mohegan Tribe.

Mohegan Gaming & Entertainment will face tough competition in bidding for a license in Hokkaido. Hard Rock International and Rush Street Gaming are two operators who have also made public their plans to establish an integrated resort in Hokkaido. 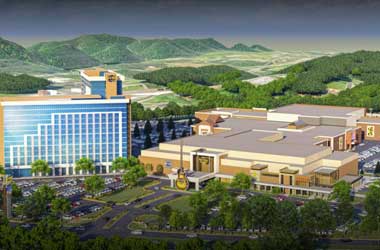