The Spokane Tribe recently held a groundbreaking ceremony for phase one of its mega development project called the Spokane Tribe Economic Project (STEP) which involves building a tribal casino near Airway Heights, Washington.

The casino development is being built on the tribe’s aboriginal lands in the historically significant West Plains which was the site of battles between the tribes and Col. George Wright in 1858.

Under the first phase, the project will see the construction of a $40 million casino featuring 12 gaming tables and 450 slot machines along with other amenities like restaurants and an outdoor plaza.

Future phases will see the tribe invest up to $400 million in the casino resort which will operate under the iconic Hard Rock brand. The casino resort will include several shopping and dining facilities, an entertainment centre as well as a wellness centre. The project in its entirety is expected to bring 5,000 jobs to the region.The first phase is expected to open within 10 months.

The groundbreaking event was attended by several hundred people. In a statement, Carol Evans, the tribe’s chairwoman said,

We have so many people to thank for this day. It’s been a long time coming. Our people have a lot of needs and we have not been able to provide for them

The Spokane Tribe first proposed the project in 2006 but had to wait for over nine years to get approval from the U.S. Department of Interior. The state’s governor Jay Inslee ratified the project last summer. According to Kevin Washburn, the Department of Interior’s assistant secretary for Indian Affairs, the project can help reduce poverty among the members of the tribe as close to a quarter of those living on the lands are said to living in poverty.

Other than jobs, the project is expected to generate funds for several development initiatives for the tribe’s betterment such as education, health care and cultural preservation. It also plans to use some portion of revenue to clean up old uranium mine sites located on the Spokane Reservation.

The project worked with the local government authorities to ensure that operations of the nearby Fairchild Air Force Base are not hampered by the facility. The Spokane Tribe agreed to limit its building height to 60 feet. Speaking at the groundbreaking ceremony Spokane City Council President Ben Stuckart said that the project would bring jobs and take care of those native to the land. 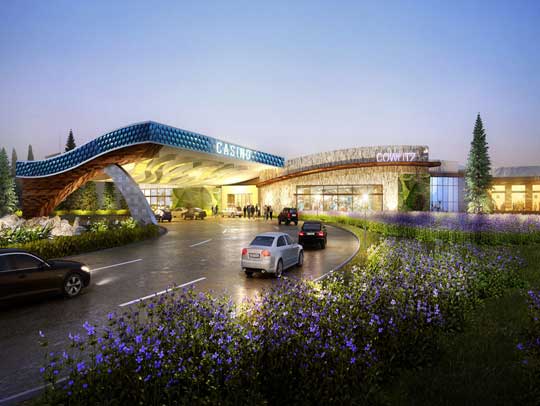