Every day thousands of individuals around the world buy lottery tickets in the hopes of becoming a millionaire overnight. The majority never win anything in their lifetime but a lucky few manage to get those all important numbers and become rich overnight.

John Wines, from Roswell, New Mexico bought a lottery ticket in December 2014 at a gas station and held on to it in the hopes that he might get lucky in 2015.

When the time came for him to check his ticket, Wines had to check his ticket repeatedly as he found that he had the required 5 winning numbers. Based on the lottery ticket he purchased, Wines was now eligible to claim prize money over $500,000.

Wines checked his numbers repeatedly just to make sure he was not dreaming and was eligible for the $500,000. When it was confirmed that he indeed had the 5 winning numbers, Wines was in high spirits already planning on how he was going to use his prize money. He went to lottery office to claim his prize money and was shocked to hear the company refusing to honour his ticket. 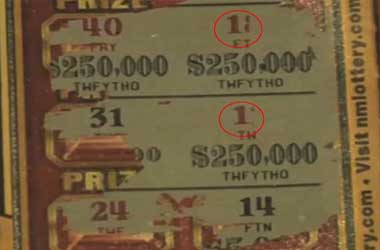 New Mexico Lottery officials denied the authenticity of the ticket because they say that particular ticket has a payout of only $250,000 and not $500,000.

The reason Wines thought he won $500,000 was because there was a misprint on this particular ticket and as a result, the entire ticket is deemed void. Wines is not eligible to collect any money as the numbers on his ticket were misprinted.

In a statement, Wines said

I mean, if you thought you won $500,000 and somebody tells you that you didn’t, and you can prove to them you did, it’s pretty stressful for somebody to say, ‘no you’re not getting your money. It’s like I told them, I didn’t misprint it, I bought the ticket in good faith thinking if I won I was going to get my money. And they told me no, they absolutely, positively told me no.

Wines sent an email to senior management of the lottery company asking them to honour his ticket but they replied stating that the ticket was flawed due a misprint and could not be honoured. The lottery will not pay Wines any cash but due to the emotional rollercoaster he was put through on account of the flawed ticket, the lottery has decided to give him $100 in scratch-off tickets.