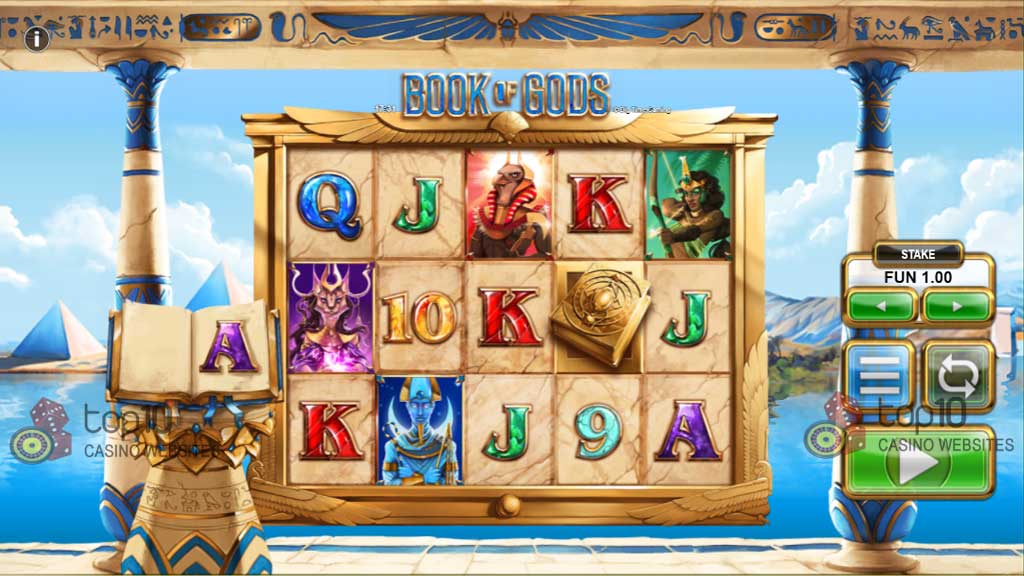 PLAY Book of Gods Slot for Real Money or Free at:

Due to recent UKGC regulations we unfortunately cannot allow UK Players to play our free to play games.

Select the Casino rooms in the table below to play the game and verify your age there.

If you want to play then you will need to register at a UKGC licensed casino and verify your age.

Book of Gods is another in a long line of Egyptian-themed video slots. The background shows vast blue skies casting a reflection on the crystal-clear waters underneath them. You can see the hills and the pyramids in the distance. Two giant pillars hold what appears to be an entrance to a temple. The reels of Book of Gods are set on stone tablets with various symbols decorating them. By arranging the symbols in the right order, they will guide you closer to the temple’s treasure.

Big Time Gaming did a great job designing this slot. It comes with an RTP of 96.35%, which is above the industry’s average. Add a bit of luck to that number, and you will be beating the casino before you know it.

Book of Gods comes with a standardized playing grid of 5 reels and 3 rows of symbols. In order to win, you need to land a winning combination on one out of the 243 fixed paylines. You can click the big Play button in the bottom right to spin the reels manually, or you can enable the AutoPlay feature. Before you do, though, make sure to set your initial bet. It ranges from 0.10 to 40.00 credits per spin. For anything else, you can click on the button with three horizontal stripes which will open the Paytables menu. 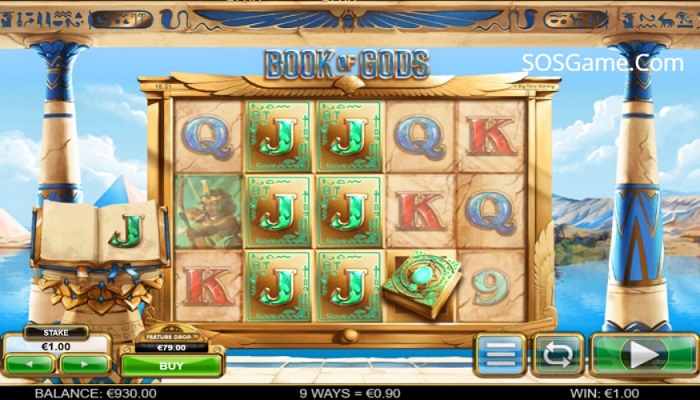 There are 10 basic symbols included in Book of Gods. The lower paying ones are represented by the playing card values ranging from 9 to Ace, while the premiums include four gods. The Book of Gods makes an appearance on the reels and acts as both the Wild and the Scatter. It will substitute for every other symbol except the Feature Drop. 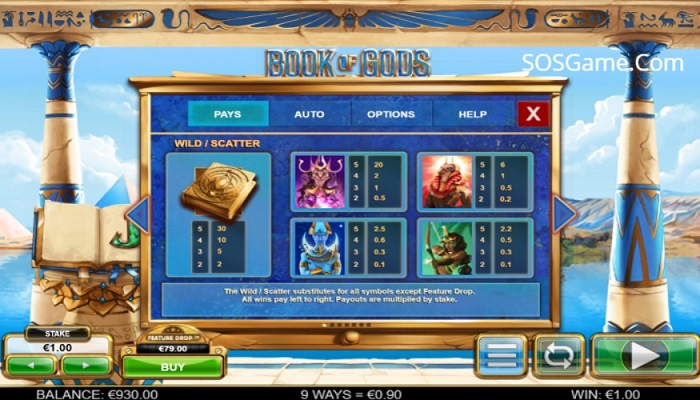 Whenever you land a winning combination featuring the symbol displayed on the book on the left, every symbol on the entire reel will change and match that symbol. This is known as the Symbol Cloning feature.

By landing 3, 4 or 5 Book of Gods symbols, you will trigger the Free Spins feature with 15, 20 or 25 Free Spins respectively. One of the premium symbols will become the cloned symbol; it works the same as the Symbol Cloning feature except it uses a symbol of higher value.

You can also opt in to buy the feature. The price is displayed on the bar labeled as the Feature Drop. Every time you land a Feature Drop symbol, it will reduce the price of the feature.

Book of Gods is one of the best slots that I’ve played, as it features everything that an avid slot player wants from a video slot. I would recommend it to anyone!