PLAY Fortunes of Ra Slot for Real Money or Free at:

Enter Ra’s sacred temple and explore the treasures left behind the mighty ancient Egyptian empire. With the help of Ra and other powerful Egyptian gods, your expedition may prove fruitful!

Fortunes of Ra is a tribute to the mighty Egyptian deity of the Sun who was one of the central figures of the ancient Egyptian empire. Worshipping Ra brought a lot of wealth which was hidden by the old civilization that flourished by the River Nile.

I’ve played a lot of slots, and not many of them had such an amazing Return to the Player figure. Blueprint gaming has always been generous, and they decided to add a little extra to the Fortunes of Ra video slot with the 97% RTP.

If you had an opportunity to play any of the Blueprint Gaming slots, you are probably aware that they pay a huge amount of attention to the design, visuals, options, and the overall smoothness of gameplay. Although there are dozens of Egypt-themed slots, I think that this one is great enough to enter the top 10 list.

Let’s check out why Fortunes of Ra is so good!

The low-paying set of symbols includes 10, J, Q, K, and A. The real fun begins with the high-paying ones, such as a female explorer, a scarab beetle, a sarcophagus, and other Egypt-related symbols, some of which even have special powers that we will examine in the Features section below. 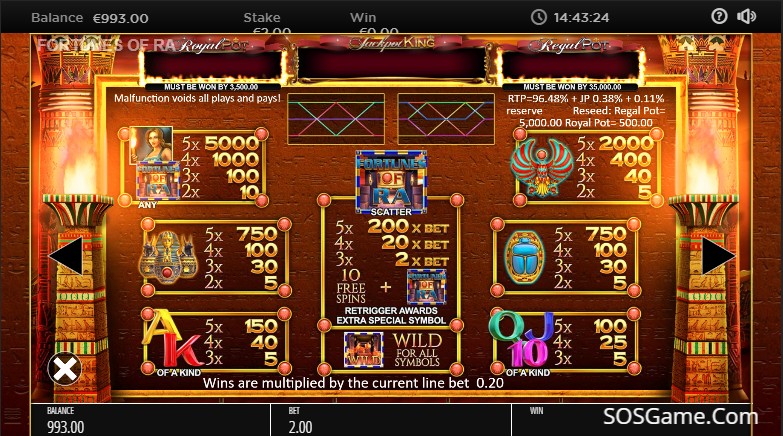 As soon as you enter the game, you get to choose a feature you want to include in it. Basically, you are presented with two options. The first one is Fortunes of Ra Classic, which offers an increased opportunity to trigger free spins feature, and the other is called Fortunes of Ra Jackpot King and randomly triggers the Jackpot King feature.

Once Jackpot King becomes activated, your goal is to spin the reels and collect as many crowns as possible. The more crowns you have, the bigger the multiplier would be, and you will also have to choose one of the items from the “Kings Treasury” in order to further increase your final prize and possibly enter the Wheel King progressive jackpot competition. 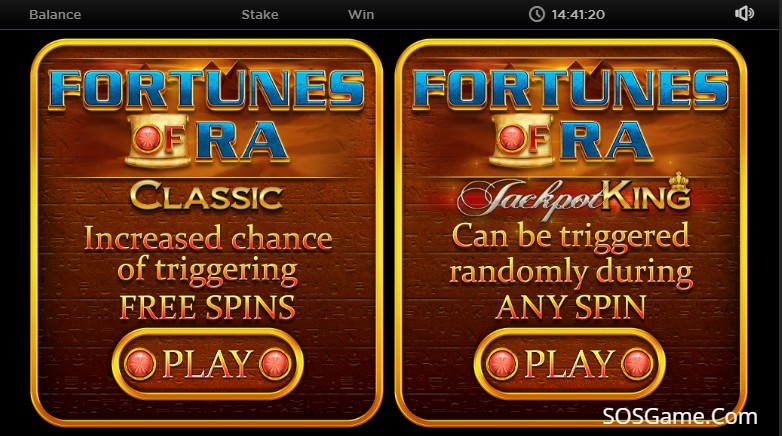 I know that Kings and Queens do not really relate to the whole ancient Egypt thing, but I don’t honestly care since the prizes are very lucrative!

You can also enjoy the benefits that the Wild and the Scatter bring. Landing three or more Scatters will award 10 free spins, generous multipliers, and an extra special symbol!

To sum up, I played dozens of similar slots and was not really eager to test Fortunes of Ra. To my astonishment, the game turned out to be quite exciting and generous. I did not manage to trigger the Jackpot King feature, but I was fortunate enough to end up with more money than I had started with.