PLAY Mars Attacks Slot for Real Money or Free at:

What once was a cult movie is now a video slot with the same name, Mars Attacks! It is an outstanding adaptation by Blueprint Gaming that comes with five 5 reels and 20 paylines.

Mars Attacks! is based on a movie of Tim Burton that is bearing the same name. When a group of Martians visit Earth, it is up to president James Dale, portrayed by Jack Nicholson, to greet them. They claim that they come in peace, but it is not long after that all hell breaks loose and a visit turns into an invasion. The background of the video slot depicts White House and a crimson sky filled with flying saucers.

Mars Attacks! comes with an RTP of 96.44%, which is slightly above the industry’s average. If you are looking for something that’s worth your time, then this video slot is an ideal choice for you.

Before you start spinning the reels, you can adjust your initial bet that ranges from 0.10 to 200.00 credits per spin. Mars Attacks! comes with five reels and three rows of symbols forming a standardized playing grid. The slot includes an Autoplay feature that will automatically spin the reels for you. For anything else, you can always click on the button labeled as ‘’i’’ to access paytables. 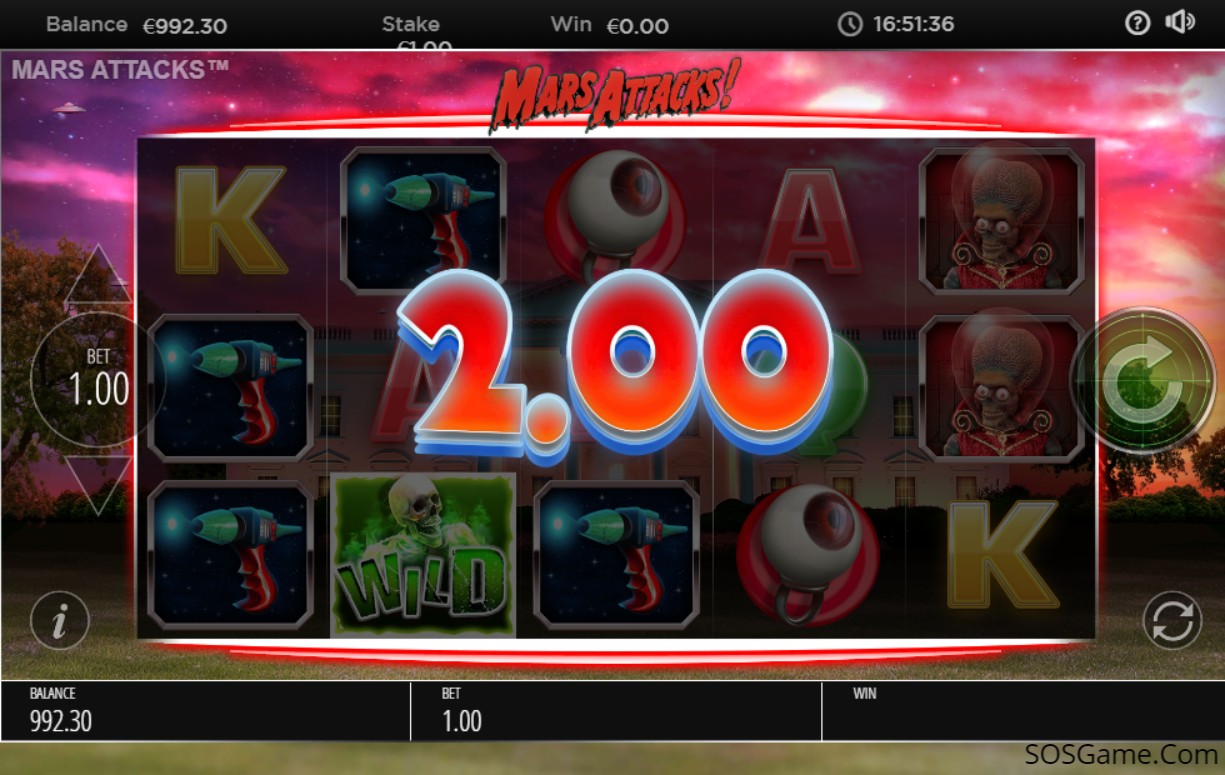 Mars Attacks! comes with a standard mix of filler and themed symbols.

The low paying symbols are represented by the playing card values ranging from J to Ace, while among the high paying ones you can find an eyeball, a TV, a zap gun, a Martian and the game logo. 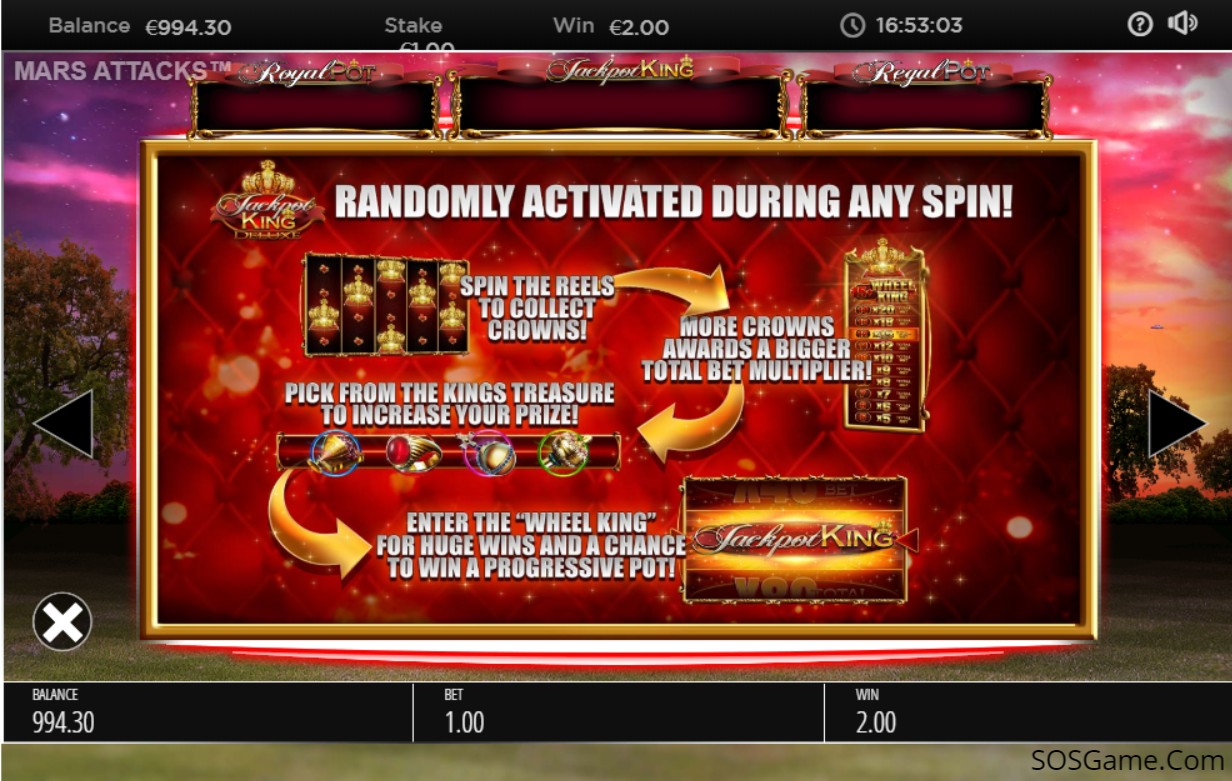 There are five features you can randomly trigger during the base game: Radiation Blaster, Mega Shrink Ray, Abduction Beam, Expansion Cannons and the Sub-Zero Lazer. 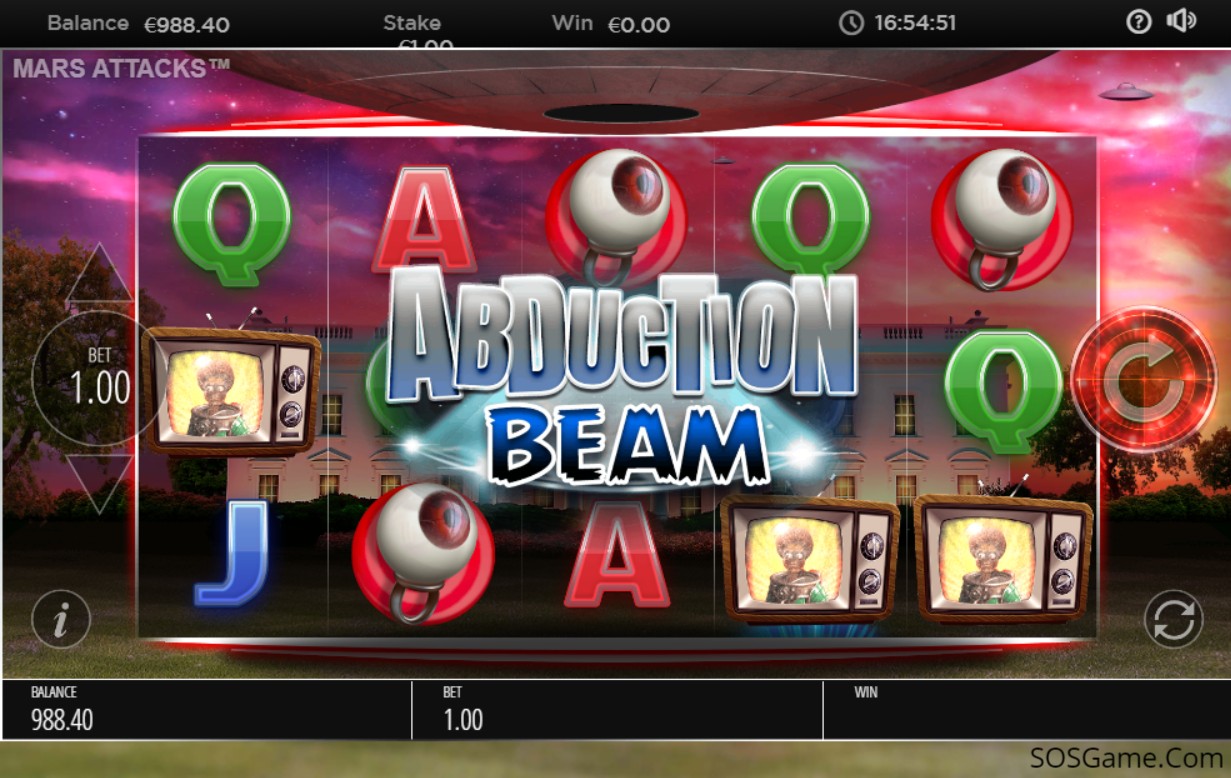 In addition, there are five main bonus features that you can trigger by landing three or more Bonus Symbols anywhere on the reels.

I loved playing this video slot, both as a slot and a movie enthusiast. Mars Attacks! is a great video slot that offers a lot of entertainment and winning potential with the ton of features it possesses. I would most definitely recommend it to all slot players out there!