PLAY The Goonies Slot for Real Money or Free at:

Blueprint Gaming is at it again with yet another video slot based on a famous Hollywood movie title. This five-reeler comes with twenty paylines and includes a ton of bonus features.

Hey you guys! Did you know that The Goonies is based on a film from the ’80s by Steven Spielberg? Of course you did, I mean, who hasn’t seen this iconic movie? If by some miracle you haven’t, you should most definitely go check it out. The slot itself is a magnificent adaptation of the film. The background that hosts the reels represents the map seen in the movie that leads to a pirates’ ancient treasure. The lovely group of misfits managed to find it, but will you?

The Goonies come with an acceptable RTP of 96%, which is the average of the modern-day video slot. With a bit of luck on your end, you will be reaping in the profits in no time!

The button on the left will allow you to fiddle with your initial bet that ranges from 0.10 to 10.00 credits per spin. Once you find the wager you are most comfortable with, you can click the well-adapted Play button to spin the reels. You will get to play on a standard playing grid that consists of 5 reels, 3 rows of symbols and a fixed number of 20 paylines. 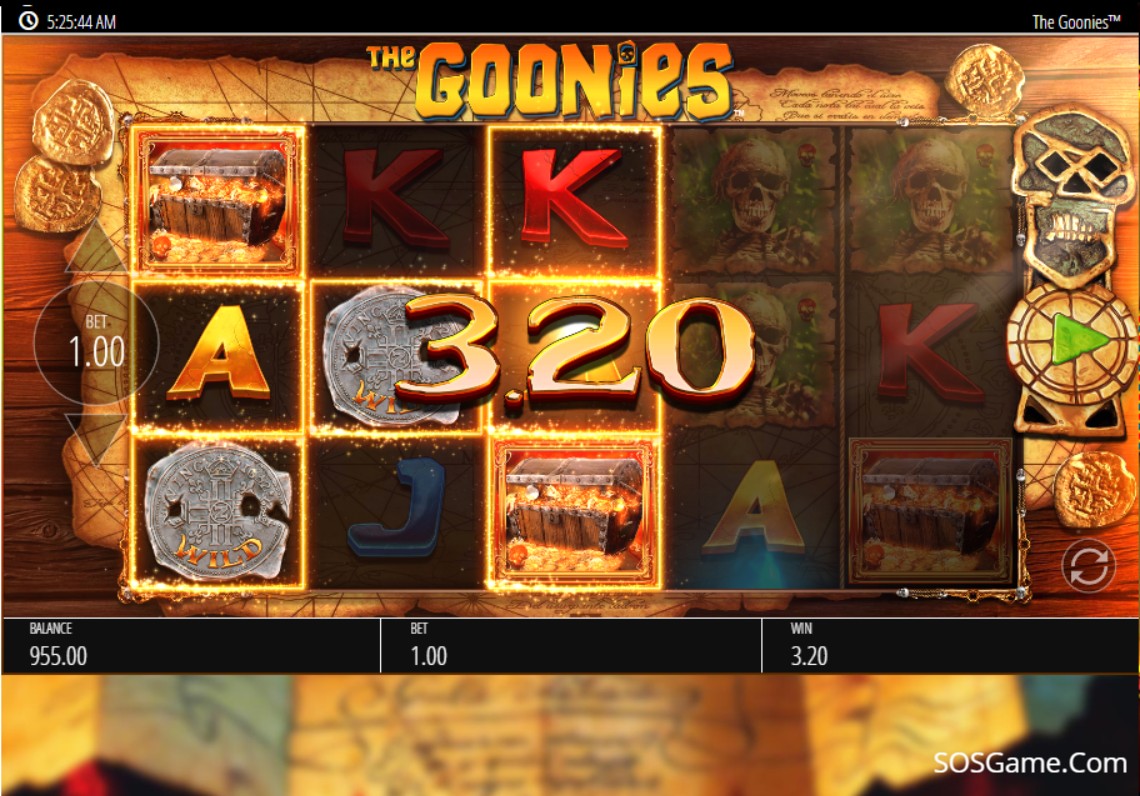 The Goonies Symbols and Bonus Features

The Goonies has more features than symbols, so let’s thoroughly dig into them!

There are four low-value symbols that are depicted as royals ranging from J to Ace. The 5 premiums are portrayed as golden balancing scales, pirate skeletons, a pirate ship, a treasure chest and, of course, Jolly Roger flags. The Wild symbol will substitute for every other symbol except the Scatter. 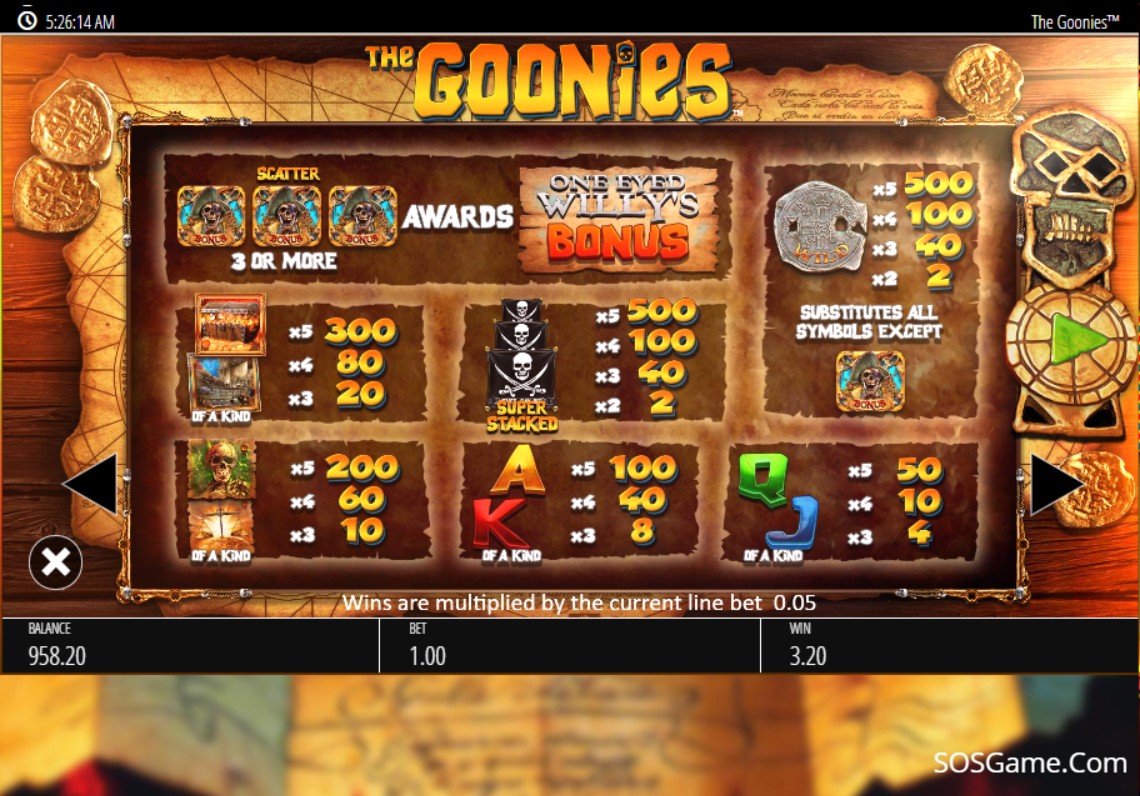 During the base game, One-Eyed Willy’s Riches will trigger at random. You will then be awarded one of the following features:

By landing 3 or more Scatter symbols, you will trigger the One-Eyed Willy’s Bonus feature. A wheel will stop and activate a random feature. Players can then gamble and try to get a more lucrative feature or play currently activated one. The wheel has a total of six features, such as Fratelli Hideout Bonus, Skeleton Organ Bonus, Super Sloth free Spins, Goonies Go Wild Free Spins, Inferno Free Spins, and One-eyed Willy’s Treasure Bonus. 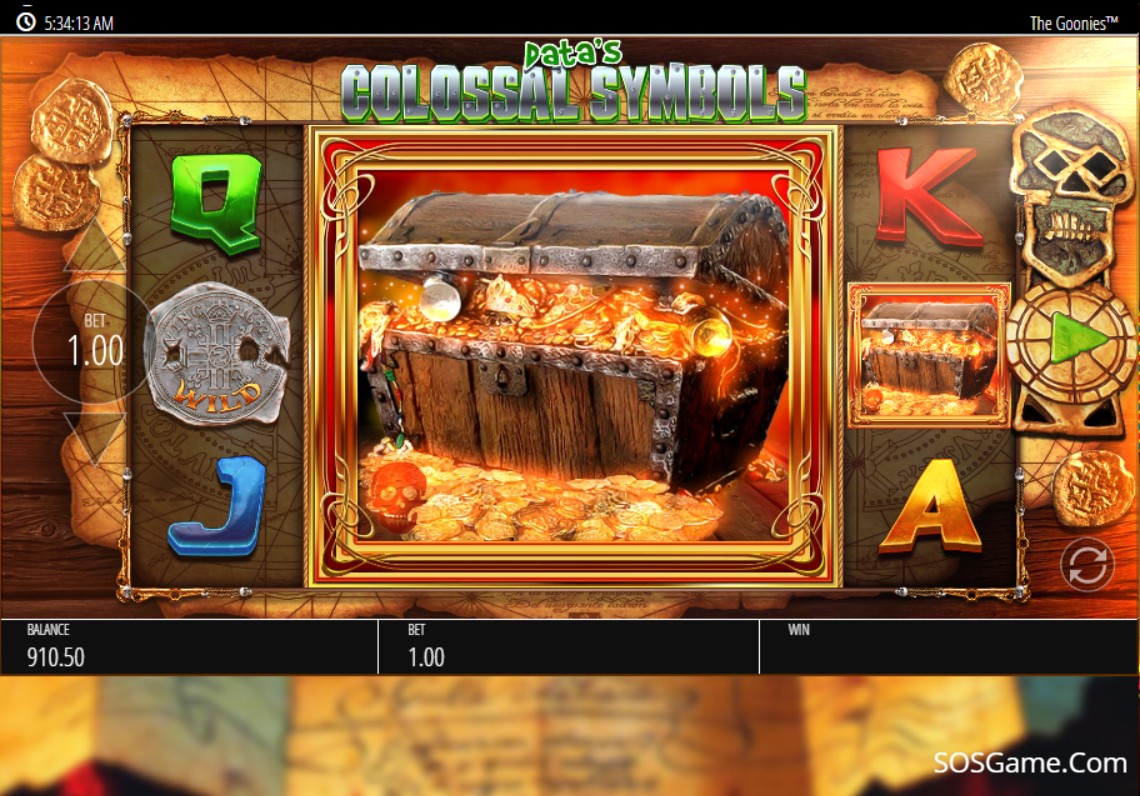 I loved the movie, and I love the way Blueprint Gaming adapted it to a video slot. The Goonies will make you keep coming back to it, and you will never have a dull moment thanks to its 12 Bonus Features. I ended playing it for hours and enjoyed every moment of it. Hopefully, you will as well!